Shift4Shop is a turnkey eCommerce solution for individuals and businesses to sell online. To promote its new brand while raising money for a worthy charity, the company partnered with SpaceX to organize a four-person mission to space with an all-civilian crew. The mission’s name, Inspiration4, recognizes the four-person crew that is raising awareness and funds for St. Jude Children’s Research Hospital.

This milestone represents a new era for human spaceflight and exploration. Even though we couldn’t reserve seats for ourselves on the flight, the next best thing was designing and developing the website for the historic mission and the brand behind it.

Setting up our goal posts

The campaign would go live during the Super Bowl, with a 30-second ad made by Known, our partner agency. The ad would direct people to the website for a chance to join the crew. Tying the campaign to the Super Bowl meant we had a clear, immovable timeline from the start.

Many high-visibility brands and stakeholders were involved, including Shift4, the publicly listed parent company of Shift4Shop, as well as SpaceX, NASA, St. Jude Children’s Research Hospital, agency partners and more. So, product definition and asset management were especially critical for the project’s success.

The campaign involved two separate but connected websites, each with its own set of requirements. 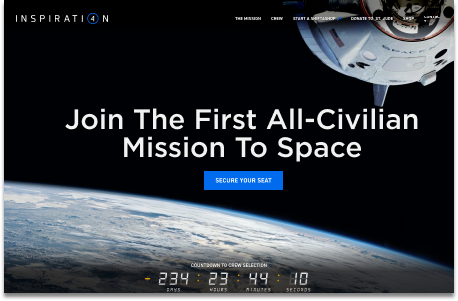 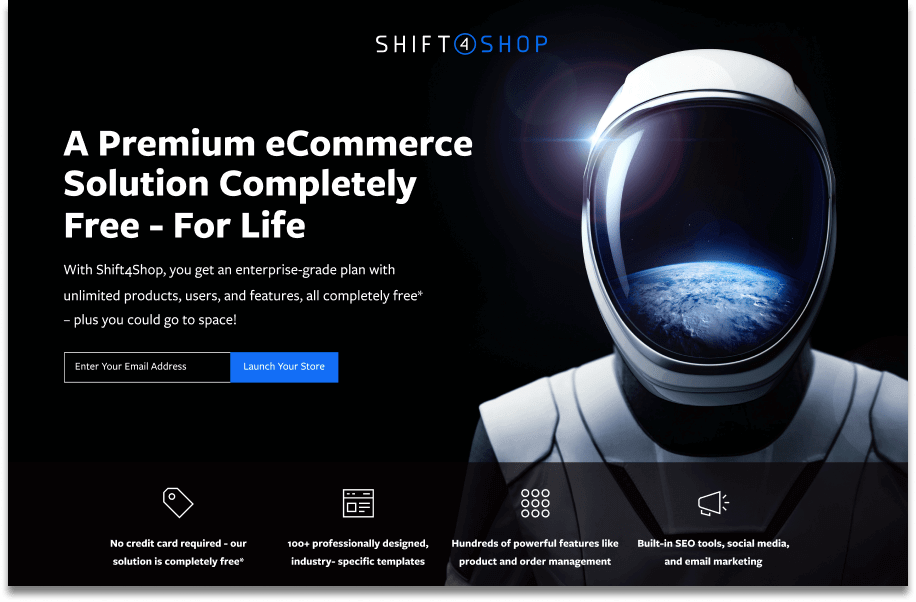 The mission and campaign site: Inspiration4.com

The mission’s site needed to be mobile-friendly, and to support a sudden surge of traffic from an estimated 100 million Super Bowl viewers, plus press and other paid media.

It also had to offer an intuitive site experience for visitors to:

This workstream involved a reskinning of an existing site with a new visual identity designed by Known. It required identifying key pages on the existing site to reskin, taking into account the site’s navigation and overall user experience. It also involved designing landing pages for people entering from Inspiration4.com, to enter the contest.

Memorable and historic yet modern

Once we received the visual ID and brand guidelines from our partner agency, we started building the site. For a mission of such historic significance (to put it lightly), we knew the homepage needed to welcome visitors with a sudden shift in perspective. After experimenting with many different styles of headers and intros, we selected aerial footage of the Earth from space with a rotating Dragon capsule. The capsule was designed by the SpaceX team, so we worked with placeholder elements until we received their brand assets. 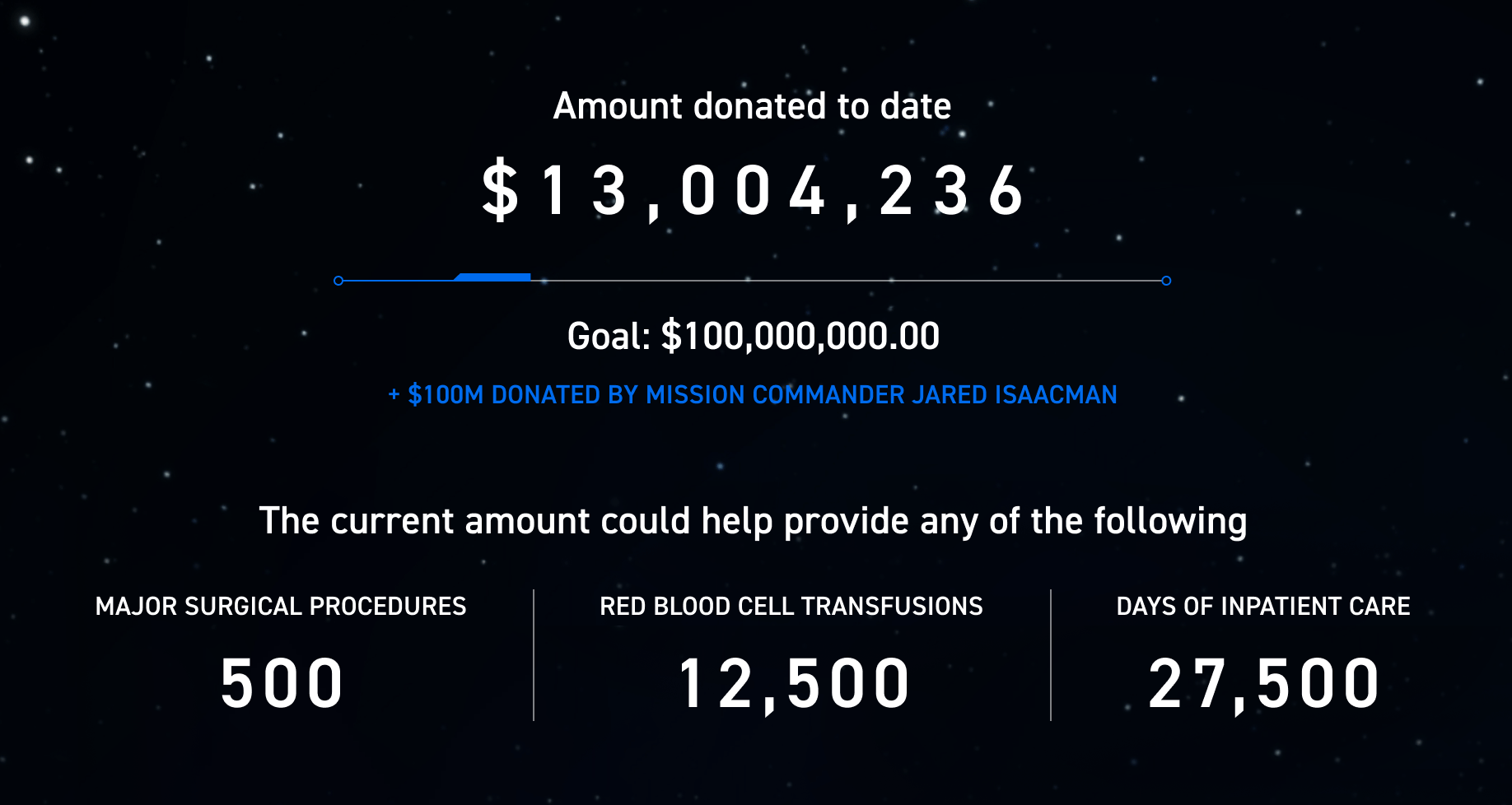 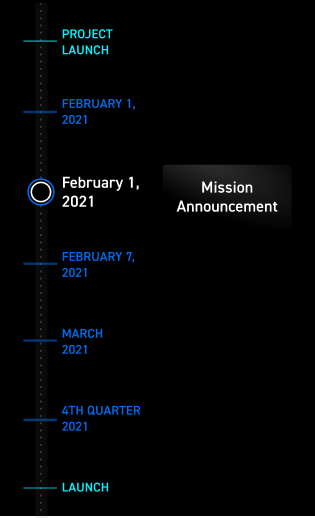 The audience would include diehard space lovers who would be tracking every milestone along the way to the mission’s launch. So we designed an interactive yet minimalist timeline of the key dates, leaving room for flexibility so as not to overcommit. We also designed a donation tracker together with St. Jude to show progress toward their fundraising goal of $200M. 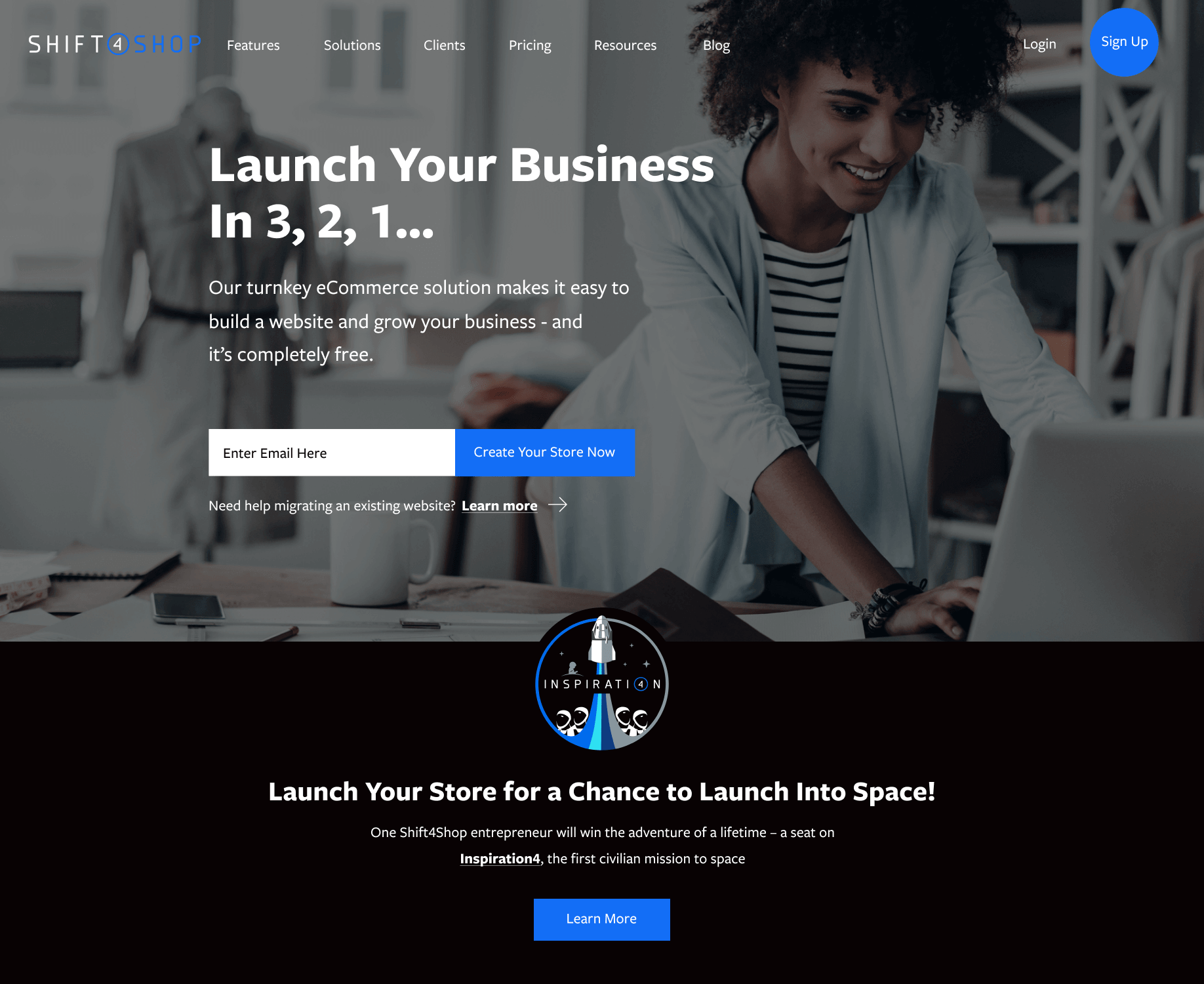 The Shift4Shop site also required a handover of brand guidelines, but this time they were applied to a reskinning of a pre-existing site. This experience had to accommodate those who went from Inspiration4.com to Shift4Shop.com in order to create their own site and enter the contest. For a seamless transition, we updated the navigation and top-level pages including the homepage, Features and Pricing.

Putting things to the test 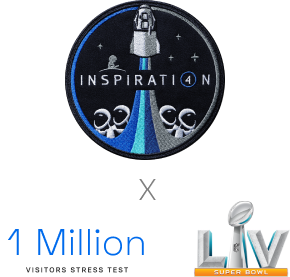 To handle a sudden surge of traffic during the Super Bowl, we used a static build for the Inspiration4 site launch, and hosted it on S3 to guarantee there would be no crashing on game day. We also used NextJS, ReactJS, StyledComponents, and Prismic for Inspiration4’s CMS, which we’ll continue to update as the project evolves over the coming months.

Maximizing contest entries meant creating a smooth, simple user journey between Inspiration4.com and Shift4Shop.com. So, we A/B tested many different landing pages which were also tested to handle over 1 million visitors a day.

The site launch was a huge success:

We can’t wait to see where things go from here.

For an inside look at the project process, check out our blog post,
How to Quickly Launch a Site Tied to Super Bowl.

Special thank you to our partner on this project, Known.